Restaurateur Jamar White thought he’d be the only game in town earlier this year when he decided to open a third location of his small, yet successful chicken wing franchise, Buffalo Boss, on 125th St. in the heart of Harlem’s still-booming real estate market.

“There really weren’t any wing places up here,” said White, 40, who founded the original Brooklyn-based Buffalo Boss five years ago in Flatbush with an investment from his famous cousin, Hip Hop Mogul and Grammy Award-winning Rapper Jay Z. “I thought I got my lease first,” White recalled about the venture. “Once I came here and put my paper on the window saying, ‘Coming soon,’ that’s when we saw Wing Stop’s paper go up a few doors down. Then we saw Buffalo Wild Wings, and we were like, ‘Oh man. This is going to be something.’”

And this is how Harlem’s wing wars began. It was preceded by a perfect storm of cultural and economic forces.

In 2009, real estate developers looking to flip cheap Manhattan properties found them north of 110th Street. Once recognized as a haven for drugs, crime, and poverty in the late ‘80s and early ‘90s, Harlem became an underpriced market and sound investment region as the city’s population continued to swell and middle-income renters looked elsewhere for affordable housing.

The influx of new people brought a slew of food entrepreneurs, and would-be celebrity chefs who set up shop in the historically black community known for soul food cuisine and its savory southern influences. The housing boom and new restaurants brought on the gentrification seen in other parts of the city even though the majority of the native population remains African American and Latino.

Upscale eateries like Red Rooster and later The Cecil joined Harlem’s stable of classic neighborhood standouts like Sylvia’s, Melba’s, and Chocolát. Many of the new additions, however, were relatively pricy dine-in establishments that catered more to the pallets and wallets of Zagat-esque foodies than to Harlem’s budding community of transplant millennials moving to the city to start careers and chase dreams on a budget.

“It’s something that I hear all the time that more moderately priced dining options is something we’re missing in Harlem,” said Nikoa Evans-Hendricks, Executive Director of Harlem Park to Park, a coalition of more than 100 community restaurateurs and retail entrepreneurs founded in 2009.

“You’ve got a younger and younger professional demographic. Columbia students haven’t necessarily been living in Harlem property the way they are now. It’s a fusion of communities the way you never had before.”

That goes as well for the ongoing appeal of chicken wings, once regarded as scraps when southern plantation owners gave them to away to their slaves. More than 150 years later, wings have become as ubiquitous to the American pallet as hamburgers, but more cost effective than the fluctuating price of more expensive meats like beef and fish. “From an operator’s perspective, it’s a cost effective business to go into,” Evans-Hendricks added.

Conventional wisdom would suggest all the new faces and corporate signage would annoy native Harlemites of old, but lifelong residents like Central Harlem’s Clara Garcia, 24, a park a recreation worker, say they don’t mind at all.

“You’ve got choices now,” she said during a recent visit to Buffalo Boss.  “Instead of walking here, here, and here, there’s options. Sometimes I wake up and I just want wings.”

“They’re taking the Chinese restaurants out of business,” fellow Harlem lifer Peter Daniels, 29, noted about the new chicken restaurants. “Being a New Yorker, you just like fast food. It’s good to be in your own community and not have to go downtown and have restaurants around. It’s kind of a plus.” 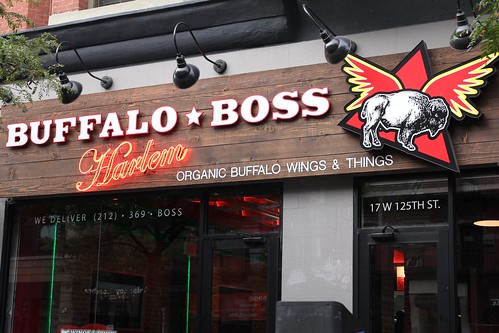