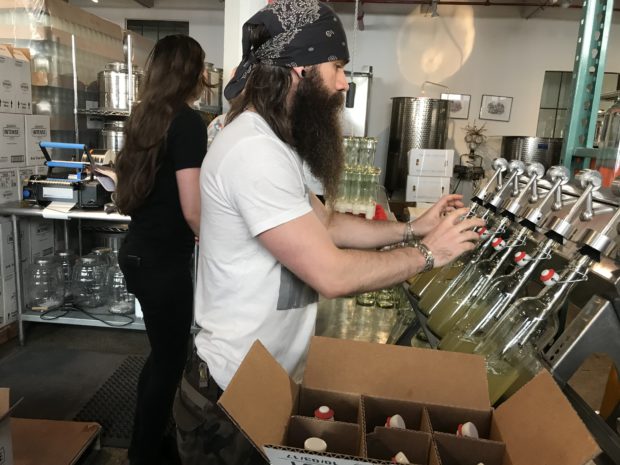 Barrow’s Intense is a unique yellow ginger liqueur elixir that goes down smooth but finishes with a sweet zest. Each piece of ginger that goes into a batch is washed, cut and bottled by hand in the Brooklyn-based distillery. Production is not the only unique approach CEO Josh Morton has taken in with his business. Barrow’s Intense is one of the few New York liquor manufacturers that has established a growing business by selling nationally, but its success now depends on further state deregulation in order to continue it’s operations in New York.

With a compound annual growth of nearly 50% since 2010, craft spirits now account for roughly 3% of national sales. Credit Suisse estimates that the industry will reach 12% in the next decade, and Morton plans to be a major player in that space, already distributing the Barrow’s name in over 35 states. The business initially bypassed the tasting room approach, and focused on selling their ginger-based product in the wholesale market.

Morton applied for a B-1 wholesale liquor license in 2011, after friends encouraged him to share his after-dinner digestif with a larger audience. With start-up costs and licensing fees drastically reduced in the Governor’s initial 2007 deregulation efforts, Morton was able to establish the business with little entry cost and therefore little risk.

The tasting room has been a popular revenue-generating approach for other New York liquor producers bringing in anywhere between 15% and 30%. However, Barrow’s consists of just three ingredients, fresh ginger, sugar water and neutral cane spirit, none of which are elements of agriculture produced within the state. According to currently legislation, this makes Barrow’s ineligible to offer tasting options to their customers or sell directly out of their business.

“We could make a version with New York grain just so that we can sell it ourselves, but it would compromise our quality and just wouldn’t taste as good,” said Morton. “It’s pretty stupid since there are ways around the law, so it just makes sense to fix the damn law.”

These legal limitations and a bit of good timing landed Morton and his company into a favorable partnership with the Serralles Family, producers of the popular Puerto Rican rum, Don Q. Generating over a million dollars annually, Barrow’s is able to leverage the Serralles national distribution network, while also helping to diversify the Serralles liquor portfolio. Under their current contract, Morton has agreed to use the Serralles family as his sole distributor, in return for national market exposure and regional sales teams promoting Borrow’s on his behalf, all without relinquishing any ownership shares. Barrow’s Intense quickly went from a local New York product to a national player, now being sold in 40 states.

Once orders began to come in from retailers, Barrow’s needed to scale up in size, Morton made the decision to outsource fundraising efforts to wefunder.com, a crowdfunding service that connects startups and online investors. Barrow’s was the first business in New York to leverage the platform in June of 2016, after Title III of the Jobs Act went into effect in May, allowing non-accredited individuals to invest in private startups and small businesses. Since then, the Barrow’s team has raised over $300,000 from 556 investors via the site.

“I bet on Josh Morton because he is a founder who meets my investment criteria and who actually gives a damn about every person in the equation, which is a rare find. Both Josh and his product Barrow’s Intense are thoroughly original, unique and full of integrity,” said investor Julie Smith.

With the additional capital Barrow’s has been able to bring on two additional employees bringing their production staff to six. They have also been able to move to a rolling production cycle ramping up to a total of three batches a month producing a total of 3,276 of their standard 750ml bottles. Barrow’s produced a revenue of $540,097 in 2015 with just 28,764 bottles sold. The team produced 85,176 bottles in 2016 and has already shipped 101,556 bottles since the end of September for 2017. Currently Barrow’s is seeing margins of 65%, and plans to increase it to 70% by automating elements of the bottling process that are currently done by hand.

“We’re going through another round of growing pains right now and the holiday months have been our busiest,” said Barrow’s production manager Danielle Hengge. “The more we grow and the more money we have to work with, the more we can increase our space and production.”

Although Barrow’s is achieving national success Morton still wants to continue to grow the business closer to home, but that will involve further legislative change. With the additional capital from WeFunder investors, Morton has begun plans to move to a bigger production space, and with that has considered the possible benefits of attaching a tasting room. Barrow’s would benefit from tasting room as a way to generate more revenue and a way to build their brand in the New York area. Henegge explained that as a liqueur, customers can feel uncertain at times about the ways in which to use it. A tasting room would give Barrow’s the opportunity to interact more directly with customers and offer suggestions on cocktail mixing.

Morton joined the New York State Distiller’s Guild in order to collectively bargain for further deregulation such as the tasting room issue, however, the different license classes have been at odds on what their specific needs are. Those with New York Agriculture based licenses recently secured the right to sell individual servings of their spirits, along with beer and wine, in their tasting rooms. But company’s like Barrow’s, that cannot make their product with New York-based materials, are still pushing for the ability to open a tasting room with their name on it. This has led to tension within the guild.

“In a way the guild has let us down, as we supported them fully in their changes to the law that benefited them and their license classes, with the promise that we will be taken care of in the future.” Said Morton “Now that they got what they wanted they are not focusing on us in the same way.”

According to President Corey Moscato, the guild’s next major agenda item is a revamping of the tax code, which is also determined based on license classifications.

“Hopefully we will get our changes in the next round,” said Morton. “It’s really one of those things where we just have to take it slowly in the mean time, and do the other things we can within our license class.”

While New York law is still proving to be a hindrance for spirits producers, Morton is choosing the path of cautious optimism given the strides the state has already made in ushering in a new era of the booze business.